Staff from CETRA’s various departments traveled to locations far and wide this summer.  During their free time they kept an eye out for funny or interesting sights about the local language.  Following are highlights from their recent travels: 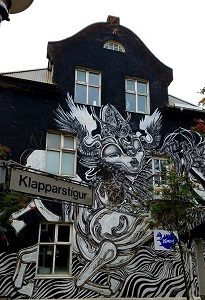 Jiri Stejskal, CEO, and Molly Stejskal, Vice President, traveled to Reykjavik, Iceland in August to participate in the Reykjavik Marathon and 10K race, respectively.  They did great!

While there, they snapped this picture (right) of a street sign in front of a mural on one of the buildings downtown.

They also discovered that there are a number of Icelandic words that have no English equivalents, and one somewhat all-purpose expression, “Jæja!,”  that can have a variety of meanings, including “Let’s get started!,” “What’s new?,” and “Thank goodness that’s over!” 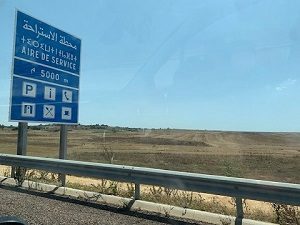 Evan Schapiro, Director of Translation Services, traveled across Morocco in June, where he learned much about the local culture, food and customs.

He snapped this picture (left) of a street sign for a rest stop somewhere between Essaouira and Marrakech.

The sign includes French, Arabic and one of the many Berber languages (middle). These were mostly spoken languages of the Berber people throughout history, now written in the new Tifinagh alphabet.

CETRA’s CMO, Angela Wende, traveled to Perth, Albany and Busselton with the Philadelphia based Pennsylvania Girlchoir in July and August.  While in the Busselton she found multiple languages on the sign for the Georgiana Molloy Anglican School.

In addition, Angela learned that Australians use “no worries” in almost every sentence, which might be indicative of their way of life.

Also in July, Wende traveled to Poland and Lithuania with the Philadelphia based Keystone State Boychoir.  In Torun, Poland, she walked the historic Bulwar Filadelfijski (Philadelphia Boulevard).  CETRA’s global headquarters is located just outside of the City of Philadelphia, USA.

Torun is an original medieval town, birthplace of Nicolaus Copernicus and sister city of Philadelphia.

In a single trip in February, Jiri Stejskal visited these three locations and found a vast assortment of language-related items that were DIY translation mishaps.  We featured them in a previous blog about the importance of getting accurate translations for international businesses.  They included mistranslated menus at regional airports and ski resort caution signs.

This is designed to be an ongoing series for our blog, and we hope that it becomes both a fun and instructional way to learn more about our various languages and cultures.  As 2019 has been named the Year of Indigenous Languages, we hope this will help to continue to raise awareness about the importance of preserving and fostering local languages.