With the 2022 Winter Olympics underway in Beijing, we were reminded of when one of our staff members volunteered at a previous Olympic Summer Games in the same city.

William Gao is one of our translation project managers.  William was born in China and is bilingual in Chinese and 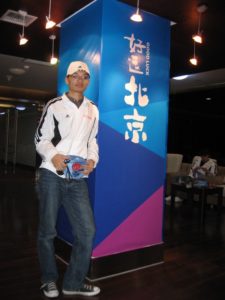 English. He volunteered at the 2008 Beijing Olympic Games.  At that time, he was still pursuing a Bachelor degree in English Language, Literature and Culture at Beijing International Studies University.  He reflected in 2019 on his experience as an Olympic volunteer:

My position during the Olympic Games was not as an interpreter. Instead, I served as a “Venue Protocol Assistant” at the “VIP Lounge/Stands” of the Beijing Olympic Basketball Gym.  Our duty was to receive distinguished guests from all countries, including former US President George W. Bush. Of course, those distinguished guests from other countries do not speak Chinese. So we communicated with them in English, so it is kind of “interpretation” if you would like to say so. For example, they may have questions about touring Beijing, about the games, about how to get to certain places in the gym, etc.

We were trained for more than a year before the Olympic Games began. The training we received included:

We are very proud of William for being such a great cultural ambassador. Thank you, William, for sharing your Olympic experience.

This article was initially published in 2019. Updated 2022. View the initial blog.