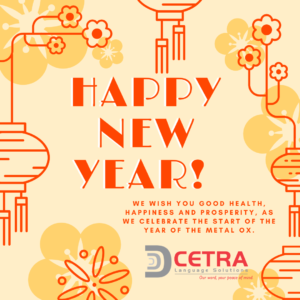 February 12, 2021 marks the start of the new calendar year across many countries in Asia. This upcoming year is designated as the Year of the Metal Ox. As the second animal of the Chinese zodiac, the ox represents hard work, positivity, and honesty.

For us at CETRA, the ox symbolizes the dedication, perseverance, and goodwill of our global language community. As we look ahead to the New Year, these attributes will be essential as we continue to help individuals and communities around the globe to understand each other and the world around them.

New Year celebrations are recognized around this time with days-long festivals in Asian communities and countries worldwide. The celebrations have many similarities, yet there are differences based on specific cultures or regions.

In many cases the celebratory terms “Chinese New Year” and “Lunar New Year” are used interchangeably to mark the New Year across Asia. Most of the time it is accepted.

However, there are key distinctions between the two, which mostly have to do with different regions or cultures. First, some Asian cultures in Asia specifically celebrate Lunar New Year and not Chinese New Year; and, second, the two can have different dates.

For instance, Korea specifically celebrates Lunar New Year. In fact, this year, there is a small cultural “war” between China and Korea over traditional clothing. Both countries are claiming that Kimchi and Hanbok originated in their country, and there has been some heated discussion between the community members.

Therefore, a person in Korea might get offended this year if they were to receive a “Happy Chinese New Year” greeting.

The differences between the Chinese and Lunar New Year reach back further then just this year. Over the past few years, using the correct term for a particular region is growing in importance. Some believe that using the general phrase “Chinese New Year” is insensitive to other cultures who celebrate the same festival by a different name. However, referring to the celebration generally as “Lunar New Year” may ignore some cultures’ celebrations.

For instance, Vietnam celebrates Vietnamese New Year at the same time as Chinese New Year with a celebration called Tet. In addition, Tibetan New Year is called Losar, and can be celebrated on the same day or even a month later than Chinese New Year. Lastly, many Muslim ethnic groups in China may instead choose to celebrate Nowruz, which is a type of Persian New Year.

For us at CETRA, we wish our colleagues and friends across Asia and worldwide great health, happiness, and prosperity in 2021 as they celebrate with their own, distinct New Year festival at this time.

Please contact us for more information on our expertise and services.