How are the recent advances in artificial intelligence and neural machine translation affecting the language community around the world? This is a question that I addressed while participating in a keynote panel at the Translators and Interpreters Summit of the Delaware Valley Translators Association, which took place in Philadelphia on May 6, 2017.

The discussion about automation of language services usually revolves around quality, comparing the output of a human translator to that of a machine. Inspired by a recent article in the Harvard Business Review titled “There Will Always Be Limits to How Creative a Computer Can Be” with the accompanying video “Can You Entrust That Decision to a Robot?,” I approached the discussion differently and created a Translation Automation Map showing the top 10 industries that generate the most revenue for language services providers. The industries are evaluated on two factors: predictability and risk.

According to the Common Sense Advisory’s report titled “The Top Industries for LSPs,” clients in the following verticals spend the most money on language services:

So on the one hand we consider the predictability of content and on the other the risk of something going seriously wrong if the content is not translated correctly. For example, legal documentation is quite unpredictable, while heavy machinery and equipment is very predictable (Caterpillar has been using controlled language for many years now). At the same time the risk tends to be high in legal cases, while it is typically quite low with user manuals for heavy machinery, which means that legal texts are much less suitable for translation automation then user manuals.

The Translation Automation Map below shows the position of each vertical relative to predictability and risk and its suitability for automated translation: 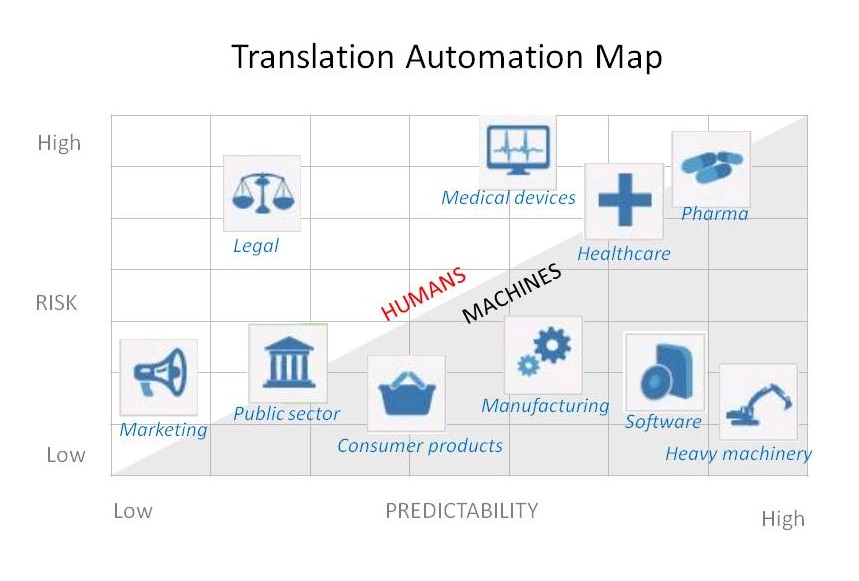 Looking at the map it is clear that individual translators should focus on marketing, legal, and life sciences, as these industries are the least susceptible to automation. For LSPs, on the other hand, the field remains wide open and tech-savvy providers who embrace translation automation will find new opportunities even in high-predictability, low-risk industries.

Blog written by Jiri Stejskal, CETRA’s CEO. Jiri founded CETRA in 1997 after immigrating to the US as a political refugee from Czechoslovakia nine years earlier.